Which is Better After A Workout: Beer or Water? 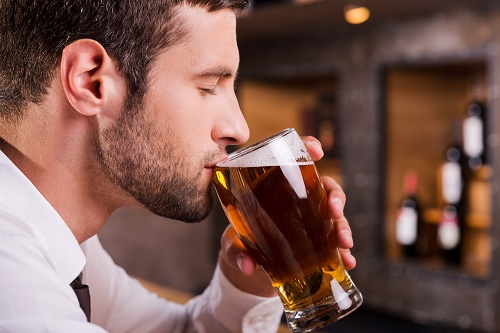 Yesterday we were warned of the health dangers associated with alcohol – not to mention bacon, ham and sausages.

Today there is more cheering news from a different set of scientists. They have come up with the perfect excuse for heading to the pub after a game of football or rugby. Their research has shown that a glass of beer is far better at rehydrating the body after exercise than water.

Researchers suspect that the sugars, salts and bubbles in a pint may help people absorb fluids more quickly.

The finding, which comes from a study at Granada University in Spain, will be welcome news for the legions of evening and weekend sports enthusiasts who enjoy a postmatch pint. It will also ease the worries of those still digesting the report from the cancer experts who linked alcohol and other products to an increased risk of some forms of the disease.

Professor Manuel Garzon, of Granada’s medical faculty, made his discovery after tests on 25 students over several months. They were asked to run on a treadmill under stifling temperatures of 40C (104F) until they were close to exhaustion.

Once they were on the point of giving up, researchers measured their hydration levels, concentration ability and motor skills. Half were then given two half pints of Spanish lager to drink, while the rest were given water.

Both groups were then allowed to drink as much water as they wanted.

Professor Garzon said the rehydration effect in the students who were given beer was “slightly better” than among those given only water.

He believes the carbon dioxide in beer helps quench the thirst more quickly, while beer’s carbohydrates replace calories lost during physical exertion. Based on the studies, the researchers have recommended moderate consumption of beer – 500ml a day for men or 250ml for women – as part of an athlete’s diet. A typical person loses around a litre of water for every hour of exercise in sweat.

People who fail to rehydrate after exercise are more likely to feel tired, fuzzyheaded and suffer headaches.

A spokesman for the Campaign for Real Ale said “moderate levels” of beer had beneficial health effects. Past studies have shown that sensible drinking of one or two units a day can reduce the risk of heart disease, dementia, diabetes and Parkinson’s disease, he said.

The ingredients of beer – which include malted barley, hops and yeast – are rich sources of vitamins and minerals.

Dr James Betts, an expert in post-exercise rehydration at Bath University, said: “People think of alcohol as being a diuretic, but if you are already hydrated, a small amount of beer could be a way of getting the fluid in.”

The best way of rehydrating after exercise was with a sports drink containing sugars, water and salt, he added.

Source: Pint of beer better than water after a workout