Which Glass For Which Brew? 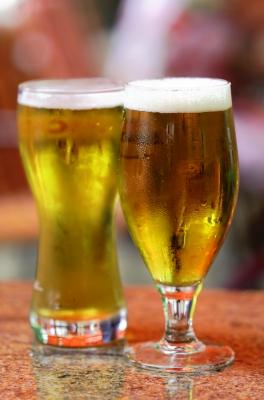 It might surprise the casual beer drinker to know it, but there are actually a rather staggering number of different types of beer glasses, each designed with a particular style of beer in mind. For the uninitiated, here are some of the more common ones, and ideas about which beers should go in what glass.

An evenly tapered glass, with no curvature, the Pilsner glass is used for drinking light beers. Generally smaller than pint glasses, they’re tall, slender and tapered, shaped to reveal the color and carbonation of the beer you are drinking from it.

Used to serve wheat beer, these glasses are narrow at the bottom and slightly wider at the top to better release the beer’s aroma. This shape also allows room for the thick, fluffy heads that this type of beer produces.

Traditional beer mugs that may or may not come with hinged lids sporting a thumb lever. Steins typically come in sizes half liter to full liter in size. These were believed to have originated in the Germanic provinces, and as such, it’s acceptable to drink pretty much any German beer from them.

Originating in England, these glasses share most of the features in common with the Germanic Stein, minus the lid and thumb lever. Owing to their English heritage, it is perfectly acceptable to drink any English beer from a Tankard, which in an English pub is often referred to as a jug.

These come in a variety of shapes, from straight or slightly tapered sided to conical and nonic pint glasses. Guinness is most commonly consumed from a pint glass, and in fact, they’ve got their very own Pint design for that purpose, but most any beer can be consumed and enjoyed by the Pint.

If all this talk of beer and beer glasses has got you thirsty, you should know that it’s drawing closer to the time of the annual Edmonton International Beer Festival. We will let you know when it’s time to get your tickets though, so come join us and have a pint, or several. Contact us today!