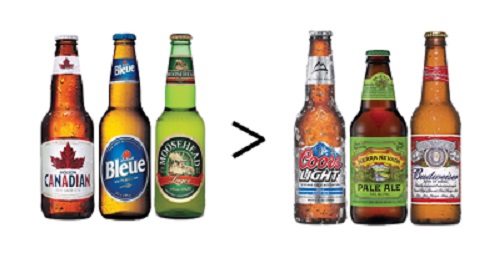 There has always been some kind of pride associated with drinking in colder climates like Russia, Canada, or Alaska, under the assumption that they produce stronger brews up there because it helps to keep them warm. Many Americans have dismissed such sentiments as myths, but when it comes to Canadian beer being stronger than American beer, there is a bit of truth to that claim.

Why some people don’t see any difference

Some people argue that Canadian beer is not stronger than American beer. They even claim that the strongest Canadian beers are no match for the highest alcohol-by-volume (ABV) US beers.

For starters, alcohol is less dense than water (weighs about 80 percent as much as water). So, a typical 12-ounce macro lager can that has 5 percent Alcohol by volume actually has 4 percent alcohol by weight. Because of differences in labelling, Canadian brews (measured in ABV) appeared to be more potent than American beers.
Canadian Beer is still stronger

Today, most American beers also use the ABV method. Using the same measure, full-bodied lagers in both countries tend to be contain between 4.0 and 6.1 percent ABV.
While American breweries can claim to have some really strong beers, like Samuel Adams Triple Bock (17.5% ABV), Canada also has a selection of strong beers, like Critical Mass (17%), The Black Bullet (15%), and Korruptor (16%). That said, Canadian craft beers tend to be higher in strength than those produced by macro brewers.
Some American breweries produce beers with less than 5 or 6% ABV because of restrictions imposed by laws. But still, the difference in beer strength between the two nations is only marginal, and may not really warrant the king of national pride that Canadians have in their beer.