The Top Ten Weirdest Beer Names In The World 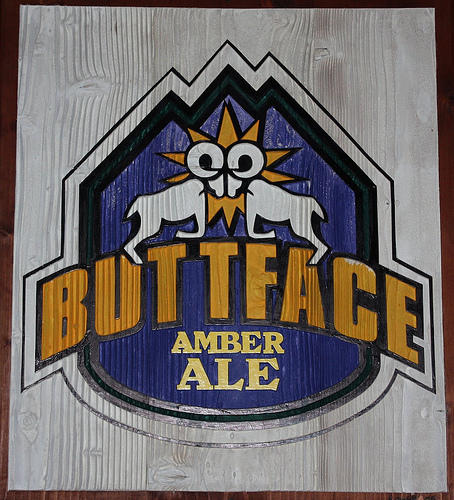 Sometimes, it’s fun to take the plunge into the unknown by trying a beer just for its strange, quirky name. Microbrewers are especially good at coming up with catchy, or sometimes downright bizarre names for their creations. Don’t pass any of these by simply because they sound funny or have an unusual name. If you do, you’ll be missing out on some real gems of the beer drinking world!

Sick Duck
This beer will get you hammered. The facts that it’s got a staggering (in more ways than one) 11% alcohol content, and that it’s brewed in recycled rum casks, combine beautifully with the fact that it’s a great tasting, award winning beer all add up to one mug of unforgettable deliciousness. Add an odd name to the mix, and you’ve got a beer that you just can’t miss.

Seriously Bad Elf
With a name like this, you almost can’t help but try this great tasting seasonal ale. Three guesses which season, but don’t wait for winter to try it, it’s tasty any time of year.

Homo Erectus
Named in celebration of our species’ two millionth year anniversary of walking upright. Beyond that, you’ll need to ask the brewers for elaboration.

Moose Drool
The Big Sky Brewing company scores a big hit with this excellent beer. Another name strange enough that it will raise a few eyebrows when you ask for it by name. No worries though, it doesn’t taste anything like actual moose drool.

Arrogant Bastard
An intentionally provocative name for an exquisitely good beer. Anything that tastes this good, I don’t care what you call it.

Santa’s Butt
This rich and hearty brew will raise eyebrows every time you ask for it by name. And it’s sure to be a conversation starter. What could be better?

Buttface Amber Ale
The label on the beer’s bottle is of two rams butting heads, with their faces pressed together. Get it…buttface?

Hoptimus Prime
You’ve either got to be a complete nerd or a huge fan of the Transformers to order this one by name. It’s good though. You’ll enjoy it.

Blithering Idiot
Truth in advertising, or an immensely clever marketing department? You decide.

And last, but certainly not least there’s this:

I’ll Have What The Gentleman On The Floor Is Having
How could you not want to drink some of this?

Well there you have it, some of the weirdest named beers in the world! For more great beers, most of them with normal names, be sure to join us at BeerFest 2015 where we bring them all together just for you!