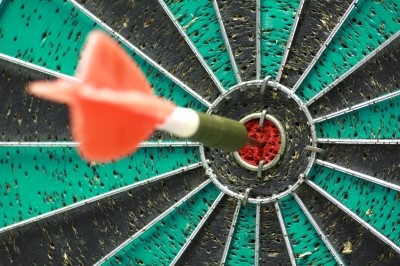 What would a pub be without pub games? Games are very much a part of pub culture and the whole experience, and over the centuries a number of classics have been developed. You may not find all of these at every pub, but if you make the rounds, you’ll see them on display and actively being played. Here are some of the best of the best.

Nearly every pub has a dart board. There’s something about drinking beer and hurling sharply pointed objects that just go together, making darts probably the most popular and beloved of all pub games. Just try to stay out of the line of fire. One Hundred and EIGHTY!

A bit less common and more old school, the idea here is that you’ve got a placard mounted on a wall with a picture of a bull. At the bull’s nose, you’ve got a hook. There’s a rope hanging down from the ceiling some distance away with a ring on the end of it. The idea is to swing the rope, aiming the ring so that it catches on the hook at the bull’s nose. Needless to say, this game’s difficulty increases exponentially as the night wears on and more beer is consumed, which is part of the fun! Quite a rarity, pubs offering this game are deserving of special notice as they are likely to have great beer.

Think of this as miniaturized bowling that you do from your chair. You’ve got a table or board. On the board, there are pins set up. You’ve got a stick rising up from the board with a string on the end of it, hanging down. At the end of the string, you’ve got a ball.

You have three tries to swing the ball around and knock all the pins down before your competition has a go, and yes, the game can get surprisingly competitive. A fun game that’s easy to learn and a fair bit harder than you might think.

To see games like these in action, and have a go yourself, beer in hand, visit the 2015 Edmonton International Beer Festival.