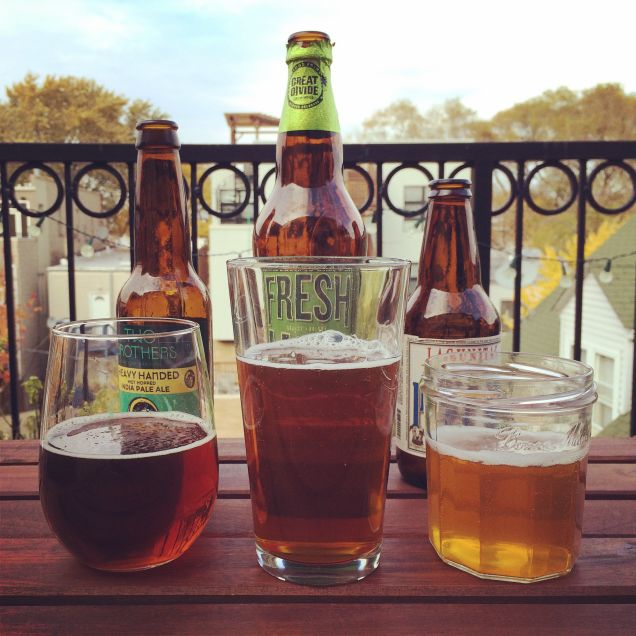 Late fall brings us a preponderance of seasonal brews, from ciders to Christmas porters to Glögg. But one you may not have heard of-and one you should definitely try-is wet-hopped beer, which is suddenly popping up in taprooms and being written about in Bon Appetit. So what is it?

First of all, let’s talk about the hops. Hops are the flower of the hop plant-the resin-packed cones-and they look a little like green acorns. Their bitterness provides the counterpoint to the syrupy sweet flavor of malt, that crisp tang that evens the keel of your IPA boat. Many IPAs are made with hops that are dried and pelletized, while wet-hopped beers are added within hours of picking, still wet and fresh from the field-presenting an interesting dilemma for brewers located further than a day from the farm. Turns out, the hassle is worth it.

A Brief History of Hops

Hops weren’t always used in beer brewing-in the earliest days, brewers used all kinds of plants to flavor beer. According to this excellent Short History of Hops by beer historian Martyn Cornell, one early mention of the usefulness of hops comes from a surprising source: Abbess Hildegard von Bingen, the German mystic whose latin texts inform some of what we know about Medieval Europe.

In the 12th century, Bingen described how hops could be used to preserve liquids. And while it’s not clear when they were added to beer, German farmers were doing good business selling hops to brewers across Northern Europe by the 13th century.

Many of the modern hops we use today are mostly descended from breeding programs, many of them aimed at creating hops that were higher in resin content. Yes, resin is the stuff that creates that bitter, crisp taste, a bit like the resin of cannabis plants. American hops-the ones you’ll be tasting in wet hopped beers around these parts-are famous for their delicious resin-y goodness.

Often, the hop cones are picked and dried, then put into a kiln and turned into little pellets. As Bon Appetit explains in this great post, pelletized hops taste very different than their fresh-picked counterparts, just like dry herbs taste different than fresh ones.
But because fresh hops start to wilt very quickly after they’re picked, pelletized hops are the practical way for most brewers to make their beers-getting hops from the farm to the brewery in under 24 hours is a logistical nightmare for most breweries.

So, considering the industrialization of the farming and brewing business over the last century, how did the idea of wet hop beer ever enter the picture? To find out, I called Jason Ebel, the co-founder of Two Brothers Brewing Company about 30 miles west of Chicago. Two Brothers makes a wet hop beer called Heavy Handed, and was one of the first breweries to try the technique from the Midwest-where access to hops, normally sourced from the Pacific Northwest and California, was anything but steady. 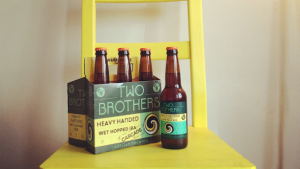 As Ebel told me, a friend on the West Coast described adding fresh-picked hops to a beer, and he had to try it. “Part of the fun of craft brewing is experimenting,” he says. “I thought, there’s got to be a way to try it here in the Midwest.” Back then, Two Brothers worked with a small Washington State hop farmer to source their hops-so Ebel called her up and asked if she’d be willing to “box them up right out of the field” and put them on an overnight truck.

The farmer was game, and the first shipment of wet hops packed in parkas made of ice packs to keep them fresh left the farm at 3PM and was already brewing in the Two Brothers’ batch by 8AM the next morning. So far so good. The next shipment was scheduled to arrive by truck the following morning for another batch-but strangely, it never arrived. By that afternoon, Ebel had scrapped the batch and given up hope. But late that afternoon, the UPS driver rolled into the lot and revealed that his haul had been opened and the ice packs removed. The hops were unusable.

What had happened? “Sorry it’s late,” the driver explained to Ebel, who cracks up recalling the story. “This got quarantined because they thought it was dope.”

That was in 2000, and much has changed about brewing culture since then. For one thing, hops moving across state lines are a far more common sight. Two Brothers is now in its 15th season of making Heavy Handed, and now grows the hops at a local farm in Pontiac, Illinois. Each six pack of the beer features three separate beers, each brewed with its own wet hop variety-Cascade, Centennial, and Chinook-and every year, the company hosts a day at the hop farm that begins with harvesting the cones and ends with dinner paired to the resulting beer.

So How Does It Taste?

There are now dozens of wet-hopped beers on the market, but keep in mind that wet-hop beers depend far more on the harvest process than conventional beers-so supplies of specific brews might not be as consistent as other IPAs. I tried the three I could get my hands on at my local shop, starting with Denver’s Great Divide Brewery, which makes its Fresh Hop Pale Ale with Pacific Northwest-grown hops. 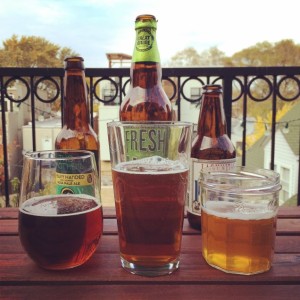 Great Divide’s contribution to this (deeply empirical) taste test surprised me. I’d read so much about wet hops, I expected a razor-sharp bite of resin. But this leaf-colored beer taste more malty than hoppy at first, until I gave it a few more sips to sink in-then I noticed the earthy stuff everyone mentions when they describe fresh hops. It was more soil than grass, and I mean that in the best way possible.

On the opposite end of the spectrum was Lagunitas’ Born Yesterday Pale Ale, which they shipped to me within 24 hours of brewing-what the company calls a “birth record.” The Pale Ale uses Amarillo, Mosaic, and Equinox hops (“picked on the equinox itself, for all those astrology fans,” says the Lagunitas). It was with Born Yesterday that I really started to taste the grassy notes. In fact, they weren’t just notes, they were intense, blaring choruses. It was almost like tasting the green-stained smell of grass, crackling and fresh. It was delicious and overpowering. 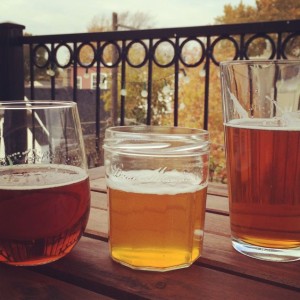 Finally there was the Two Brothers’ Heavy Handed I’d heard so much about, which landed somewhere between the two. It was more like a layer cake of earthiness and crazy, bright citrus, like the bastard child of a rye and an IPA, with a crazy porter uncle. Ebel had described it perfectly by saying that wet hops add “an extra layer of depth,” adding “earthy, sometimes grassy” character to your IPA.

There was a surprisingly huge range between the three beers, which I had kind of expected to taste like double IPAs on steroids. That’s definitely not the case; wet-hopped beers are more of a way to taste the plants themselves, each with their own eccentricities, than a single style of beer. It’s way more fun that way, really, a bit more like wine-tasting for beer fans. Now get out there and drink some.