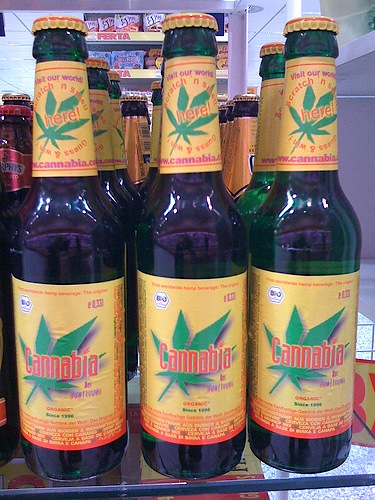 Everybody has their go-to favorites when it comes to beer, but if you’re in the mood for a little something different, then here are ten brews made with unusual ingredients that will have everyone around you raising a curious eyebrow when you place your order.

Brought to you by 21st Amendment Brewery, this beer is crafted with, you guessed it, oyster shells. Specifically, Hog Island Sweetwater oyster shells. According to the brewery, it gives their stout a “silky, salty finish.” If you love all things oyster, you won’t want to miss this one.

For beer with a bite, try some Green Chile Pale Ale, by the Santa Fe Brewing Company. Drink up, and pass the nachos.

Germany is leading the charge here. In 1996 the country changed its drug laws to allow the use of “EU-Hemp” in their product, provided that the commercial goal does not lead to the mis-use as a narcotic. Thus was the beer known as Cannabia born.

A Belgian beer that’s best served a little on the warm side for maximum mustard seed impact. The warm taste of mustard goes beautifully with the hops – this beer is great with crusty bread and strong Canadian cheddar at lunchtime.

Old Dominion’s Oak Barrel Stout is infused with a pound of vanilla beans in each barrel to give it its rich taste and sweetness. Vanilla is the most popular flavor in the work (yes, more popular than chocolate). This beer has a one of a kind, very subtle flavor you won’t want to miss.

Don’t think we’re repeating ourselves here, this brew, brought to you by the Wynkoop Brewing company is actually brewed with bull testicles. Yes, you read that correctly. Bull testicles. So, anyone for a beer?

Brewed with bacon and maple syrup, this strange concoction is brought to you by Rogue Ales, and is delicious, because as everyone knows, everything is better with bacon. Might work as a breakfast time hair of the dog; or perhaps not!

Mamma Mia Brewing Company may be onto something. Pizza and beer go together anyway, so why not combine them into one thing. Have your beer and pizza too! Best of all, since it’s brewed with basil, oregano, tomato, garlic and actual pizza crust, it really does taste a lot like pizza! I suspect this is not much of a grown up taste.

For a taste of the great outdoors, give this Winter Ale by the Alaska Brewing Company a try. The company hand picks Sitka spruce tips to give their product a rich, unforgettable flavor. I can’t help thinking that this was inspired by resin in the Greek retsina wine.

Wild Heaven is an Imperial Brown that is dense and malty, with a terrific balancing coffee flavor. A great blending of two classic tastes that will have you reaching for seconds, thirds, fourths and more.

Intrigued? You’ll find some of the most fascinating beer flavors in the world at the 2015 Edmonton International Beer Festival; not to be missed.