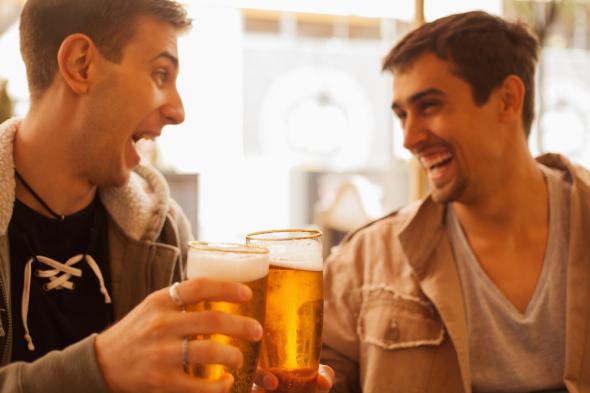 So say researchers at the University of Illinois in Chicago.

They found that men with a couple beers under their belts were actually better at solving brain-teasers than their sober counterparts.

To reach that surprising conclusion, the researchers devised a bar game in which 40 men were given three words and told to come up with a fourth that fits the pattern.

For example, the word “cheese” could fit with words like “blue” or “cottage” or “Swiss.”

Half the players were given two pints. The other half got nothing.

The result? Those who imbibed solved 40% more of the problems that their sober counterparts.

Also, the drinkers finished their problems in 12 seconds while it took the non-drinkers 15.5 seconds.

“We found at 0.07 blood alcohol, people were worse at working memory tasks, but they were better at creative problem-solving tasks,” psychologist Jennifer Wiley reported on the Federation of Associations in Behavioral and Brain Sciences (FABBS) site.

Wiley conceded that her findings run counter to popular belief that alcohol hinders analytical thinking and muddies the mind.

“We have this assumption, that being able to focus on one part of a problem or having a lot of expertise is better for problem solving,” says Wiley. “But that’s not necessarily true. Innovation may happen when people are not so focused. Sometimes it’s good to be distracted.”

It may also help explain why raving drunks like Ernest Hemingway, John Cheever or Charles Bukowski were able to write their books.

“Sometimes the really creative stuff comes out when you’re having a glass of wine over dinner, or when you’re taking a shower,” Wiley said.

Researchers also found that men are more likely to solve a problem when working in groups of three rather than two.

“In groups of two, we tend to be more polite, not to confront or ask questions,” Wiley said. “But when you respond to a question in a group of three, you’re not confronting, you’re speaking up for the whole group.”