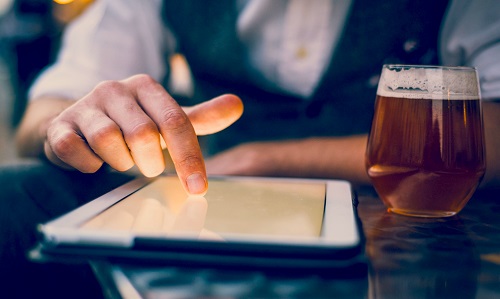 Many consumers have a beer once in a while when going out, without putting much thought into it. Others, however, are passionate beer drinkers who take several things into account when choosing their beer, and beer apps aim to improve the whole experience. From what beer would go best with your meal, be it salmon or burgers, to locating a craft brewery serving that special pumpkin ale you’ve wanted to try to a review of which establishments have the best cheese boards and wings to go with those beers to helping plan a beer-sampling road trip, these apps up the enjoyment level of the beer-drinking experience.

Both iOS and Android users can choose from a slew of beer apps available, either free or paid, but not all of them are worth your time. Here are 5 beer apps (in no particular order) generally rated at the top of their category:

Untappd is one of the most popular applications in its category, with numerous beer drinkers relying on it to improve their experience. The app is easy to use, has a clean design, a strong community and several other neat features that place it at the top of beer-drinking apps. Untappd lists nearby establishments serving craft beer so you can get an idea of available options, while user reviews and photos aim to paint a picture of what to expect from a certain establishment.

The app will recommend different beers, give you badges as you try out more brews, allow friends to compete, and let users share their experience on Facebook, Twitter, or Foursquare. Lastly, Untappd also works like a beer journal, keeping track of the beers you liked or disliked based on your ratings. Untappd is a free app available for both iOS and Android, as well as other platforms.

This free app is widely considered the best tap list finder, as it features frequently updated tap lists that enable users to find out what’s available on tap at a certain establishment before the go. The app will deliver notifications when a specific beer becomes available, or in case there are any changes to the “On Tap” menu, and it also lists available options. BeerMenus is available only for iOS, but interested beer lovers can also use it online.

Widely considered one of the best apps of its kind, iBrewMaster aims to get you started in the art of brewing your own beer. The app comes with 50 preinstalled recipes, but users can buy more through the app or create their own recipe. For personal creations, the app will provide estimations regarding alcohol content, calories, color and IBUs, the International Bittering Units scale, a measure of the actual bitterness of a beer from the alpha acid from hops. iBrewMaster can guide users through the whole process, offering info on everything from availability of ingredients to the fermenting process, bottling options and others aspects of home brewing. The app costs $6.99 and is available for both iOS and Android.

This free app basically provides a Yelp feed that lists drinks instead of bars and restaurants. Elixr delivers a slew of photos into one’s feed, organizing everything into clean listings that are easy to scroll through. The whole app is revolving around specific drinks, allowing users to check in with their individual beverage. Simply put, instead of checking in at a certain bar, you’ll check in with the specific beer you’re drinking. The app even has a geolocation map of nearby bars, which can help users find the beer bar that has the type of brew they like. Elixr doesn’t deal exclusively with beer, as it offers such info on all sorts of drinks, but its beer community is quite dedicated. The app is free and available for download on iOS and Android.

This free app has an extensive trove of roughly 13,000 ABVs listed in its database, allowing users to easily search and find out how much alcohol is in that beer. The app lists the alcohol by volume content of beers both domestic and imported. It’s quite straightforward and easy to use. The app is available for iOS and Android.