Liquid Gold: How Beer is Made 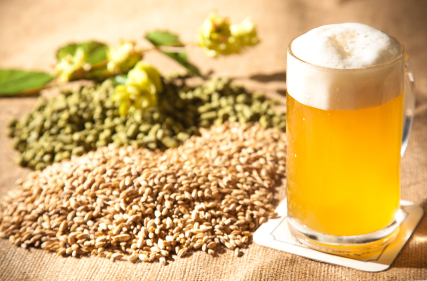 Everyone knows the basic equation: barely+ hops+ water+ yeast = beer. However, there is more to the this drinking delight than initially meets the eye. Here, we will discover the secrets behind how beer is made, also called brewing.

The first and most important step of making beer is called “Malting”. Here, the barley, or rye, is harvested from its grain and subjected to a soaking, heating process, and drying process. This allows the grains to begin to germinate, cracking the outer layer and effectively producing fermentable enzymes. This process determines the overall color of the beer. All of this work is preparation for the next step, called mashing.

The mashing process is one of the most simple, yet most important aspects of brewing. Mashing involves steeping the malted grain in nearly boiling water to release the maltose sugars from the enzymes. Once this process is complete, the water is drained away and the brewer is left with wort. Next, the wort is subjected to another round of water heating.

Boiling the wort in water is an important step. In fact, it is so important that it is estimated to have saved England from losing its population during the Black Plague. You see, the wort is boiled in water and all of the hops and spices that give beer its unique flavor are added to the mixture. The hops add the distinct bitterness of beer to balance the taste and allow the brewer to add their distinctive flavor to their beer. Boiling the water also kills any bacteria in the wort and water, and it saved lives because the hot water killed the plague virus and stopped the transfer of disease via water. Again, this step is preparation is for the delicate fermentation phase.

This step is truly the heart of beer brewing. After the boiling is done, and the wort mixture is filtered, it is added to a fermentation vessel and has the yeast added to it. After this addition, the beer is then stored at room temperature for several weeks depending on the specific beer or flavor that is trying to be achieved. Also, variations on the fermentation process are what determines the alcoholic content, and thus strength, of the beer.

The final step in learning how beer is made is aging. This is rather self explanatory, but not many people realize why it is necessary. After the fermentation process, you will have flat, alcoholic beer. The crisp flavor and carbonation comes from the Carbon Dioxide that builds up during the aging process. Again, you can age your beer from a few weeks, up to a few months to produce strong, delicious beer.

So there you have it, a quick run down on how your favorite delicious drink is made. The next time you are enjoying a brew with your friends you can educate them on the complicated process behind how it is made and look like a Beer Genius!