Let the Games Begin: Have Your Own Beer Olympics 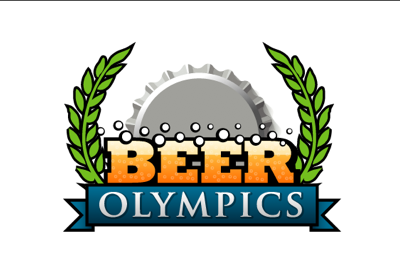 The Beer Olympics combine the competitive nature of intramural sports, with the enough beer to drown a small village. But, if you’re going to partake in the most sacred of competitions, you have to do it the correct way.

Teams must be made up of no more than 6 participants, and no fewer than 4. Every team must have an equal number of players.

Ideally teams will have the same number of girls on them, to avoid one team being at a disadvantage.

There needs to be between 15-20 cans of beer allocated per player, per team. It’s always better to air on the side of caution and go with the bigger number, because if you run out of beer mid-competition, you are disqualified and your team loses a set number of points, and it’s not like any extra beer would go to waste.

Every team competes in every event, but not every team member.

For scoring, you take the number of teams you have, and award that many points for first in each event (6 teams=6 points for first). Last place always gets 1 point. Every team in between…you get the point.

To avoid confrontation, teams represent a color, not a country. There’s no way I’d represent any country besides the good ole’ Canada! (And I know my fellow bros echo that sentiment)

Teams are introduced. Coming out to a legendary song is not only awesome, but also encouraged.

The order of events are announced (as decided upon by team captains).

This is the best event to start off with. Not only does every team member get to participate, everyone gets really drunk, really quickly.

1. Each team is given one large bucket.

2. Into the bucket 1 can of beer per team member is poured.

3.The clock starts when the first participant beings to chug, the clock stops when all the beer has been finished. Points deducted if there is an ‘excessive’ amount of beer spilled.

Beer Pong (Beirut for you traditionalists): Number of Participants – 2 per team

Tried and true, beer pong is a staple of every BROlympic event. However, this isn’t your mother’s 10-cup.

2. Each team is allowed two members per side.

3. 1 celebrity shot per team, per round.

4. If the ball is bounced into a cup, that cup and another are to be consumed by one team member. If the ball is bounced, it can be swatted. If a player knocks his own cup over on a swat, a penalty is assessed. He/she must chug a can of beer, and while they’re doing that, the opposition gets to shoot until that can of beer is finished. Regardless of how many cups were hit and by whom, “rollback” and “fire” rules do not apply during penalty shots.

5. In official Beer Olympics play, in the spirit of speeding up competition, “catching fire” and team “rollbacks” are allowed. Fire is achieved after a single player hits 3 cups in a row, and rollbacks occur when team members both hit cups in the same turn.

6. If both players on one side sink the same cup, the game is not over (as is tradition), the opposing team has to chug 3 cups each, including the cup that was hit twice.

For this event, each team needs 4 participants. A girl (This is why having at least one girl per team is crucial. Hopefully you get the thin girl who has a little divot in her stomach when she’s on her back, but if you get a “bigger” girl, you’re taking that shot out of the belly button, son), a bro to take the shot off of her, a bro to hold the funnel, and another bro to actually funnel the beer. You cannot hold your own funnel, there is no “I” in team. The girl lays down on a table, and one shot of an agreed upon liquor (usually tequila) is poured on to her. Salt is then spread in a line on her chest, and a sliced lime is put in her mouth. Before “go” each team is allowed to pour the beer into the funnel. On go, the bro funneling has to get down on a knee, finish his beer, get up and then run across (ideally the lawn) and tag his other bro in, who then runs to the end of the yard, takes, the shot, licks the salt, grabs the lime and then sprints back to the finish line (which is on the opposite side of the lawn from the girl). Fastest time wins.

2. A point-deduction penalty is assed if:

3.  If any player cannot hold their alcohol for this specific event, that player is disqualified, and the team must finish the Olympics one man down.

At this point in the day, your motor skills are on par with those of a mentally handicapped penguin, that’s why flip cup is the perfect game to get into. Everyone knows how to play, and in this event there are no penalties. Only difference is in the Beer Olympics, there is one anchor per team. The person who is going last has to chug two cups of beer and successfully flip both cups. Once everyone on the team has been an anchor, that round is considered completed, and the points are tallied up. In the event of a tie, one more round without anchors is played.

Congratulations. You’ve made it to the final event. Civil War. This game follows the basic rules of civil war; three cups per person, once your cups are sunk, you’re eliminated. If the ball is shot, and bounces off of a cup and to the side of the table, it’s fair game for each team. Only the person closest may retrieve that ball, no jumping across the table. While they’re down, their teammates can protect their cups from bounce shots.

1. Once your eliminated you may do nothing more than offer your team moral support in the form of catchy cheers. No celebrity shots, no drinking their beer for them.

2. Points are based on how many cups the winning team has remaining at the end of each round.

IN THE EVENT OF A TIE
There is to be a case race. However many teams are tied send up two representatives (unless 4 or more teams are tied, then one each). A 30-rack is then placed in the middle of them. On go, they have to drink as many beers as they can. When the case is done, or when all sides have decided they can’t drink anymore, whichever team has the most empty beer cans on their side is declared the winner.

Once all the points have been tallied up, a winner is declared.

Only gold medals are given out, because first place is the only place that matters in the Beer Olympics. If you’re not first, you’re last.

Any leftover cans of beer are allocated to the winners.

Now, take this knowledge that I’ve bestowed upon you, and make your parents proud, as a Beer Olympian.