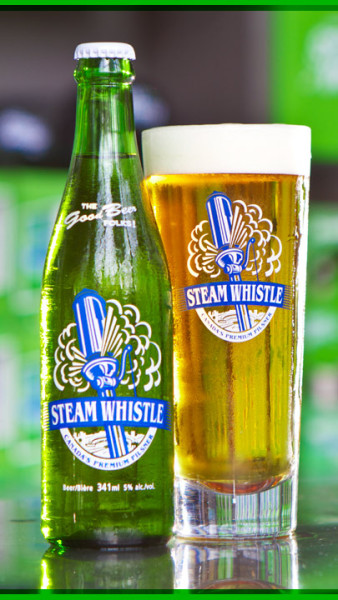 Steam Whistle Brewing is an independently owned microbrewery in Toronto, Ontario. Steam Whistle was founded by the “Three Fired Guys.” The present owners are “The Good Beer Folks.”

“The Three Fired Guys” refers to three guys who got fired after the micro they worked for changed owners. “The Good Beer Folks” is a group of private investors most of whom are employees, family, and friends.

Steam Whistle is renowned for its beloved Canada’s Premium Pilsner. The company’s founders made a conscious decision to brew only one kind of beer. The choice has enabled the company to focus all of its energy in brewing one Premium, proudly Canadian beer.

Steam Whistle is also a fantastic story of entrepreneurship with a big heart. The company is green, literally and figuratively. The brewery has even won many environmental awards. To help save the planet, the company has numerous green initiatives that include:

1. Green bottles are really green. The bottles can potentially be re-used for up to 45 times- the industry’s standard is 15 times. Their painted logo saves trees and eliminates the need for ink, varnish and glue. And every element from their packaging line is also recycled.

2. Reliance on all natural products. Incredibly, Steam Whistle uses only four ingredients that are all-natural and GMO-free. The ingredients are pure spring water, malted barley, hops, and yeast.

3. Since 2007, Steam Whistle Brewing has been using clean, renewable power.

4. Since 2006, the brewery has been using biodiesel in their delivery trucks.

6. Waste diversion program- Among other ways of diverting waste, their “spent grain” is used by Wellington County farmers as animal feed.

A story on Steam Whistle Brewing can’t be complete without a mention of the brewery’s green vintage vehicles. The company’s vintage vehicle fleet makes a spectacular sight. Each of the green delivery vehicles has a personality and a name. There are names such as Chuckles, Grumpy, The Party Bus, Lumpy, Betty, Shakey, and The Scout.

Edmonton’s International BeerFest endeavors to bring you all the good beer news and tales. We also honor amazing brewers who work hard to give beer lovers fantastic beer flavors. We also love talking about International Beer Fests that bring together good brewers and beer enthusiasts.