Draft Or Bottled – The Battle Of The Giants 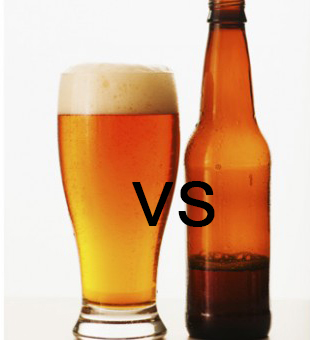 Which is the best way to dispense beer – draft or bottled? Ask two different beer lovers, and you’ll probably get two different answers. Some prefer draft brews, while others swear by the bottle.

Most serious drinkers prefer draft beer, which tastes and feels more like a “living” substance, has more complexity and layers of flavor, and also presents better in the glass, with the correct head and general appearance. In fact some beer are so distinctly different depending on whether they are draft or bottled, that they are almost two different products; Guiness is a good example of this.

The reality is, it depends primarily three different factors:

Of course, this is the biggest consideration. If you prefer your beer one way versus the other, then by all means, stick with what you like. You’re the one doing the drinking, and you should have it the way you want it, no matter what the hype or this month’s ad campaign might have to say about it.

Condition Of The Tap Lines

Some bars are good about keeping their tap lines clean and clear. Others aren’t so great at it. A dirty tap line will demolish the flavor of even the best beer on the planet. Other than asking the direct question, the only way to find out is to order one from the tap and see what it tastes like. If you’re undecided, do a blind taste test. One bottle of your favorite brew, and one ordered from the tap. Compare and stick with that, but you should also take into account that it’s going to differ from one bar to the next, and sometimes, even from one week to the next at the same establishment.

A lot also depends on how the bottles, kegs and barrels are stored. Beer should be kept cold as much as possible, although a bit of warmth helps bring out its flavor. Still, if your local bar keeps their bottles in a stock room for days or weeks before transferring to the cooler, it’s going to dilute some of the flavor. Definitely something to keep in mind, along with the tap lines.

At the end of the day, it’s going to require a little experimentation to find out which you like better, which is good in a way, as it means the opportunity to enjoy more beer, and what’s not to like about that?