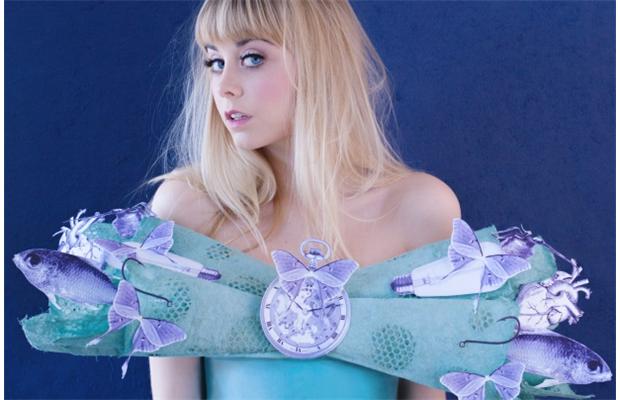 Cinderella waltzes across a pillow. Alice In Wonderland sleeps on a shirt. Princess Anna smiles from a box of tissue.

Singer-songwriter Lyra Brown’s bedroom is adorned with some of her favourite characters from Walt Disney’s animated films, from Snow White to Frozen.

“I grew up with Disney and I think it’s important not to abandon things that inspired you in childhood just because you’re an adult,” says the 23-year-old Edmonton musician. “One of the main reasons I started singing was because of Disney. First, I would memorize Disney books on tape before I could read, and I’d sing the songs from there. Then, I’d watch the films over and over and over and over.”

With her long blond hair, tiny frame and wide blue eyes, Brown could easily be the model for Disney’s next heroine. The album cover of her just-released debut, The Language of Eyes, even features the musician as the star of her own fairy tale – with fiery eyelashes, a flock of moths and a tower with a Rapunzel-like braid flowing out the window.

Brown’s songs are almost as whimsical – 10 lilting piano numbers starring her acrobatic and innocent vocals – yet her lyrics hint at darker, heavier themes. Demons. Scrubbing toilets. First love. Abandonment. Trying (and failing) to learn the language of ‘I’ instead of always putting others ahead of yourself.

“Let your hair down, I want to save you,” she coos on Big Fish Too Soon. “All I want to do is comfort you and abandon myself again,” she swoons on As It Seems. “I used to sit and wait and drop everything if you happened to need me,” she confesses on Cheek & Bruise, which tackles the embarrassment of letting someone take you for granted.

Sounds like the plight of a Disney heroine, right? Brown won’t divulge specific details about her struggles, but admits they directly contributed to The Language of Eyes. “A lot was crumbling around me and you unconsciously believe that it’s your job to hold everybody up.”

“I was really good at being the strong one – and I think those songs are the result of me crumbling as I tried to hold everybody up. It feels very lonely when you have to put on this facade of strength and I think a lot of people can relate to that feeling. So that’s how I want to comfort people.”

Songwriting wasn’t always a comfort to Brown. She wrote her first tune when she was three – The Washing Machine Song – but didn’t seriously start working on lyrics until she was 13. “Very embarrassing. I only showed my cousin,” she laughs. “Songwriting was such a secret act, I didn’t want to tell anybody, but then I kind of came out of shell and started writing on guitar and piano when I was about 14.”

A year later, Brown played her first gig – at (the now defunct) B Scene Studios off Whyte Avenue. She also forged an online friendship with one of her musical heroes, Emily Haines of Metric, around the same time.

“I gave her a two-song EP I had recorded at B Scene Studios and we started emailing back and forth. She was very encouraging and showed belief in me right away. That really made an impact on me. We kind of lost touch as time went on, but I never stopped writing. So I think she was the catalyst. I owe a lot to her.”

Over the next few years, between 2009 to 2013, Brown developed a faithful following in Alberta, playing various folk festivals, radio shows and house concerts. But it wasn’t until Rawlco Radio stepped in with a $10,000 grant that Brown was able to record The Language of Eyes with Edmonton musician/producer Jay Sparrow and engineer Brad Smith at Red Panda Recorders. “I sent them 20, 30 songs and they were like: ‘OK, you’re beyond ready to do this’!” she laughs.

She’s ready to share her songs with the rest of the world – The Language of Eyes is now available on iTunes and she’s applying to play festivals across Canada. She’s also ready to face whatever struggles come her way in the future.

“If you use your pain for something creative, it’s never a bad thing. I’m sure I’m going to go through a lot more s—, too. It’s unavoidable – and it’s a blessing in disguise.”