A Day in the Life of a Brewery: 7 Steps in Brewing 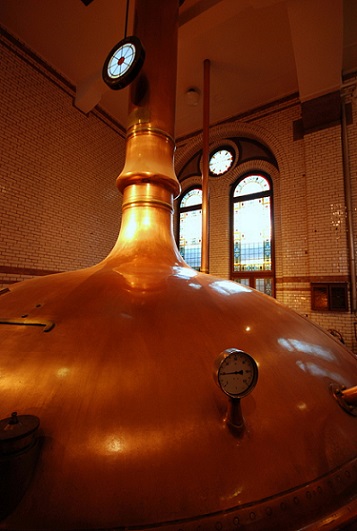 Ever peeked through a brewery’s window expecting to see guys tasting and enjoying freshly brewed beer? Many who steal a glance see many shiny tanks, hoses, and gizmos that leave them wondering what goes on in a brewery. So how is a typical day in a brewery?

An ordinary day in a brewery depends on the kind of alcoholic beverage being brewed, a brewery’s capacity and tricks of the trade. Nevertheless, the brewing process is similar for most breweries. Here are seven steps that make up the brewing process:

1. Milling
Beer making starts with the milling of brewing grains. The different types of malted barley are measured depending on the recipe. They are mixed and crushed into a coarse grist, neither too coarse nor too fine.

2. Mashing
Mashing looks like porridge making. It involves the mixing of milled grain with water and methodically heating this mixture. Mashing allows the breaking down of starch in the grains and eventual conversion into sugars. These malt sugars feed the yeast when it’s fermentation time.

3. Lautering
Lautering is a process of separating the mash (the thick porridge) into a clear sugary liquid called wort and spent grain. The separation is done using either a lauter tun or a mash filter. Usually, the sweet wort is run off first. The remaining substance is recirculated before sparging. During sparging, the extract that remains with the residual grains is rinsed off with hot water.

4. Boiling
The sweet wort is boiled evenly and intensely to ensure its sterility. The boil may last between 50 and 120 minutes. During the boil, brewers add bittering and aromatic hops that give beer its bitterness, flavor and aroma.
At the end of the boil, brewers set the wort into a whirlpool. Whirlpooling helps to collect accumulated dense solids mainly hop matter and coagulated proteins. Soon after filtration, the wort is cooled to prevent oxidation.

5. Fermentation
The chilled wort is pumped into tanks for fermentation. Brewer’s yeast turns the wort into alcohol and carbon dioxide. The kind of yeasts used and the fermentation temperature will determine whether the final product is an ale or a lager beer.

6. Filtration and Conditioning
We now have the beer! After fermentation, the beer is chilled and allowed to settle. Filtration and period of settlement depend on beer style. Filtering is meant to stabilize the beer’s flavor, but not all beers go through filtering.

From the conditioning tanks, the finished beer goes into bottles, cans, and kegs. The beer is now ready to leave the brewery. Secondary fermentation may continue to offer natural carbonation. You can now enjoy a pint in a pub near you!